First Direct wins battle of the banks – but how good is it really?

Plus ca change in the latest battle of the banks. We stick with the big guys, but if we do move, it’s for better customer service.

Proving this point, First Direct has just won the British Bank Awards by Smart Money People, taking top place in five of eight possible awards in the customer satisfaction league tables.  And the big four, which together have an 85 per cent market share, sit at the bottom of the list, with RBS in last place. Nationwide Building Society takes second place and new entrant Tesco Bank is in third.

Overall, the results show customer satisfaction levels have increased from 76% to 82% over the past 12 months. Great – banks are getting it right more often than not.

In an area bereft of true competition, First Direct owes much of its hard-won reputation to good customer service. This should be a basic requirement of all banks.

But we’d like to see banks go further and demonstrate their values not just in customer-facing ways, but by offering evidence of values right through their businesses. This might start with good service, develop into transparency and end with Environmental and Social Governance working right the way through investment banking decisions, so that we all know our banks are not just good to us, but good to other people (workers and communities) and the planet too.

Because sometimes good customer service can hide a multitude of sins going on behind the scenes.

Skeletons in the closet

First Direct and M&S Bank, for example, are both ultimately owned by HSBC, a bank castigated just this week for unethical goings behind its doors, such as financial crime.

There are other skeletons in its closet. According to Bank Track, it invests in a good chunk of less ‘environmentally satisfactory’ companies, such as BHP Billiton mining, Anglo American, Shell and Coal India, to name a few.

Again according to Bank Track, some of the less-publicised sectors HSBC has invested in include activities such as Great Barrier Reef coal and gas exports, patents on chimpanzees and other animals, mountain top coal mining, and Canadian tar sands. Meanwhile HSBC has recently been hauled over the coals for the extent to which it has allegedly helped clients avoid tax.

We are willing to bet that quite a few First Direct customers would be unhappy if they knew, via HSBC, what their money is funding. The problem with banking, unlike other things we do with our money (like spend it), is that it is not transparent. We generally don’t have a clue what the banks do with it. And they like it that way.

It’s time to think about banks in the same way some of us increasingly think about food – by taking account of provenance. Or in the case of banks, a kind of backwards provenance – not where our money comes from, but what it goes to.

As Mike Fotis, founder of Smart Money People, puts it: “It’s encouraging to see that customer satisfaction has increased, but the industry shouldn’t rest on its laurels as it’s clear that the public’s expectation of what a good bank looks like is still fairly low.” 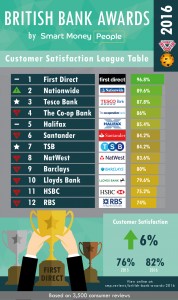 The findings also reveal people are becoming more discerning when it comes to assessing whether or not they are getting value for money from their financial products. Kerry Richardson of Darlington said of her Co-op Bank Current Account: “I find the benefits attached to the current account I use to be fair and good value. I pay a small monthly fee which provides me with travel insurance, mobile phone and gadget insurance, as well as RAC cover. I will continue to bank with the Co-op and am secure in the knowledge that they’re a fab bunch of people as well as being a fab company to bank with.”

The winners of the eight categories in the Smart Money People survey are listed below:

What do you think? Is your bank all style and no substance? Are there other banks such as Triodos and Charity Bank you think should also feature in these ratings? Is it time we opened up a “values” category in awards such as these? Do comment below.

Find a bank with better values every step of the way here.

Post: M&S and Virgin are challenger banks – but how good are they?

To help you be good with your money, don’t forget to sign up to our newsletter, for information and inspiration like this straight to your inbox, every week www.good-with-money.com