ANALYSIS: Where the Conservatives lost to Labour on young money

It’s possible that by now, you will have seen this bar chart as you flick through your social media feed: 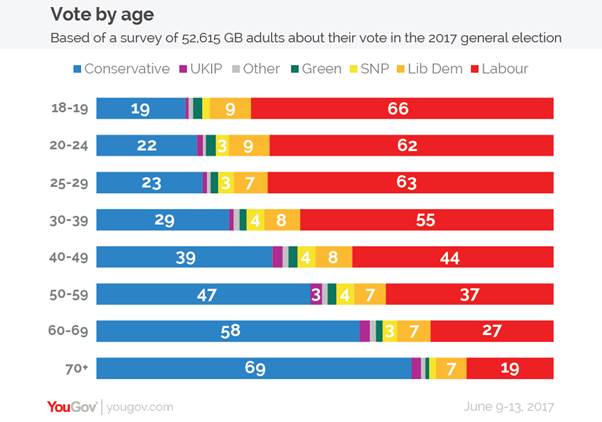 The analysis further shows the young were overwhelming in favour of Labour, with 66 per cent of 18-19 year olds voting for Jeremy Corbyn’s party and 62 per cent of 20-24 year olds. Meanwhile the older generation swung the other way, with only 19 per cent of the 70+ age group voting for Labour.

The pain of disenfranchisement is felt most acutely in the pocket.

It is not new that the young feel robbed of their futures by the old. The old, being more numerous than ever and benefiting from the economic timing of their birth, may feel that this is not their fault.

Nevertheless, this sense of intergenerational inequality is now feeding into political allegiances and suddenly making devising the policies that affect the young a lot more pressing.

“The younger generation have found their political voice and Westminster had better listen. Over time, I expect policies to tilt in their favour.” Richard Buxton, Old Mutual Global Investors

Here’s where Labour was more appealing than the Conservatives to younger voters on financial matters, and where policies that affect finances are now most likely to concentrate:

Labour said it would abolish them and bring back grants. The Conservatives had no such plans. This one is likely to have been a significant vote winner for Labour. No one wants a £44,000 noose round their neck when they graduate, yet that is what today’s graduates who take out student loans face.

The housing market – that crucible of intergenerational anxiety – is no place for the young and indebted, who must save a five-figure sum or await a hand-out to buy a home.

The Conservative Party can be considered to have failed by its own standards to boost the supply of affordable homes – it has overseen a general rise in homebuilding in the last two years, but this rise has not been enough to meet demand.

Labour says it will build one million genuinely affordable and social homes over five years and offer discounts to first time buyers. This is the right aim – no different from the aim of the Conservative government, which also introduce the Help to Buy ISA. It’s getting it done that’s the tricky bit.

Graduates do not earn what they used to. Graduate starting salaries have remained largely flat over the last ten years and now average £24,804, according to CV-Library.

Personal tax allowances – the bit of what you earn that is not taxed – have risen over recent years under David Cameron’s government, so while graduates have been paying more back on loans, they have at least been paying a bit less in tax.

Both Labour and the Conservative Party say they are committed to keeping taxes low for low and middle income earners. Where Labour differs is that it wants to increase the amount of tax paid by the highest earners, which it considers to be those earning more than £80,000. These higher income workers would be taxed more under Labour.

The party also wants to increase corporation tax and capital gains tax to pay for other measures to boost public services.

Young people are unlikely to be hit by Labour’s higher tax rates. The older generation certainly would be.

Ask a young person whether the state triple lock was the reason they voted Labour instead of Conservative and without wishing to underestimate a generation, it’s possible you’d be met with a blank stare.

Still, whether they realised it or not, Labour’s policy of keeping the state triple lock would be favourable to them once they reach retirement, as it means the state pension entitlement will continue to rise by which ever is the higher of earnings growth, inflation or 2.5 per cent. But it is actually costing them now and would continue to do so until they themselves retire, as today’s state pensions are paid for by people working now.

The Conservatives were set to ditch this policy in favour of something a little less costly to maintain.

Jon Greer, head of retirement policy at Old Mutual Wealth, said: “By voting for Labour, the young also voted to keep the pension triple lock, which sees the state pension increase by the higher of earnings, inflation or 2.5 per cent, and promised to scrap state pension age rises.

“Calculations show that if the triple lock were retained beyond the middle of this decade then that element of the state pension alone could end up costing around 1 per cent of GDP. Analysis from the Cridland Report shows that if that 1 per cent rise was faced today this would be the equivalent to a rise in taxation of £725 per household, per year.”

Aegon pension specialists dispute this analysis, believing that “it is the youngest workers who could actually see the greatest uplift in their state pension over the long term if the triple lock was protected.”

Steve Cameron, pensions director at Aegon, said: “In the long run younger workers could miss out from a pension that is constantly uprated by a minimum of 2.5 per cent before and after they retire.”

What could happen to young money under the new Government?

Richard Buxton, head of UK equities and CEO, Old Mutual Global Investors, said: “Millennials are the first generation to face the prospect of being worse off than their parents.  They have had enough and want a fairer opportunity set than is offered today.

“Intergenerational inequality is the real topic politicians and policy-makers will have to address over the coming years.

“Inevitably, we have reached the end of the road for policies which favour capital over labour.  Do not anticipate further falls in corporation tax.  Expect more indirect and direct ways of extracting a greater ‘contribution’ to society from big business.

“Expect new thinking on how to fund students through college.  A levy on share buybacks to fund student grants? This could be exactly the sort of policy we face in the years ahead.

“Higher earners should also brace themselves for a greater ‘contribution’ too.  Do not be surprised if the ‘mansion tax’ resurfaces.  Early abolition of inheritance tax is dead in the water – if anything, rates might rise as an involuntary means of diverting intergenerational wealth.

“The younger generation have found their political voice and Westminster had better listen. Over time, I expect policies to tilt in their favour.”

Banks: focusing on the E and S as well as the G

Can an electric car save you money?