If you think the idea of investing in the stock market is a little dull, that’s because for ordinary investors sticking a few bob in a fund, it’s almost deliberately uninspiring. Funds are given names that turn your brain off instantly like “passive income tracker” – hardly the language that will inspire a generation to squirrel away their savings.

But if you really let yourself get into it; if you read some analysis by fund managers, or the annual report of a company you invest in, pretty soon you realise that investing is a study of the world around us, with a monetary value placed on what you learn.

It is where imagination meets commerce, belief and vision in action, in boardrooms and behind trading screens. Money makes the world go round, so investing is incredibly empowering – where you invest can be your way of choosing which way you want to make it spin.

This doesn’t come across so much when you dropdown-click select-passive tracker fund. All of that wonderful power and creativity gets lost. All you are doing is choosing something with an expected return number you feel is realistic, based upon your risk profile. Yawns. Ville.

And the truth is that unless you are really into certain stocks (companies) and love the buzz and thrill of watching their value of your money rise (and sometimes fall), you are probably not going to stray too far from the bland index tracker funds, which now dominate the retail investment market, or from choosing from a list of the UK’s most popular funds, because if it is good enough for everyone else…..

Neither of these approaches is likely to inspire you very much. Index trackers literally just track the performance of an index of certain companies. And popular funds, which generally invest in a range of companies that the manager likes or that fit best within a certain theme, will rarely excite you enough to talk about them at the dinner table (except, maybe, to boast about your returns).

There’s plenty of work being done by robo-advisers such as Nutmeg, Moneyfarm, Wealthify (recently bought by Aviva) and others around making investing easier and more accessible for the mass market. But these platforms, slick as they are, won’t exactly engage you in what your money is doing in the world. In the context of really understanding our power to influence things through our investment choices, these are the equivalent of dishwater.

But something is changing our received notions of investing being “boring”. It’s not user interfaces, cartoon characters or apps that send us messenger messages – it’s impact investing.

For the uninitiated, this means investing for returns, of course, but also only in companies that are solving the sorry messes of the world, like water shortages, or man-made climate change.

Some clues about how impact investing is pressing buttons in people never before pressed by the act of investing can be found in the EQ Positive Impact 5 Year Review, designed to enable customers to invest in a range of positive impact funds from £1,000.

According to the report:

– Companies in its “balanced” portfolio have 39.4 per cent more employees than they did in 2012 (an annualised growth rate of 8.7 per cent per year). Growing numbers of employees points to healthy levels of job creation. So impact investing creates jobs.

–   The balanced portfolio also emitted 62 tonnes of CO2 less than the FTSE 100 Index per £1 million invested. Its companies also sourced on average a significantly higher proportion of their energy from renewables. So impact investing reduces Co2 emissions.

–   Innovation is required to make progress on many of the UN Sustainable Development Goals. Companies within the Positive Impact Portfolios have invested heavily in research and development, increasing their average spend by 37.4 per cent since 2012. This compares to virtually no change in average spend for the FTSE 100 companies. So impact investing increases the sum total of human knowledge and skills on the planet.

These points give just a small indicator of why impact investing is suddenly turning people on to the power of their own money. If you choose impact, it’s empowering. It’s an endorphin rush – like any other virtuous action. And the best bit is you don’t sacrifice returns. The EQ portfolio has consistently outperformed its benchmark. As have many of the impact funds now open to your money (you can download our Good Investment Review for more ideas).

The story of the financial outperformance (over the long term) of an impact approach is repeated, to an embarrassing degree for less enlightened asset managers, over and over again. That’s because the story humanity currently appears to be writing for itself is a pull back from the brink of self-destruction, thanks in large part to technologies being developed by brilliant companies that you yourself can invest in. 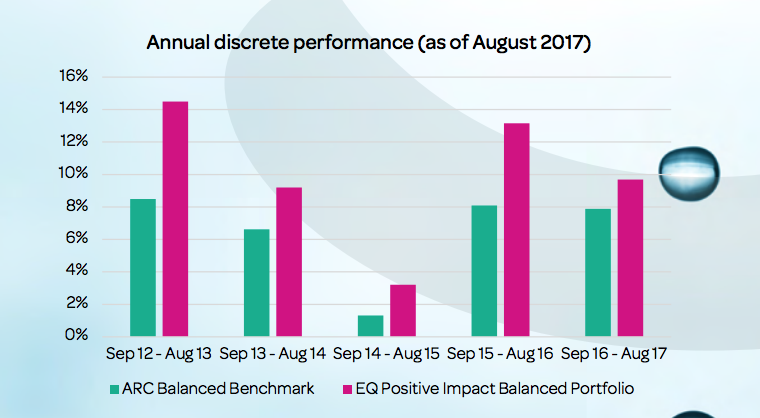 Businesses won't walk the ESG talk as energy bills up £500