A Cystic Fibrosis sufferer aims to raise £50,000 through crowdfunding to help her publish a cookbook for people whose diet is restricted by surgery or illness.

Pippa Kent, 28, was diagnosed just before her second birthday with Cystic Fibrosis, a genetic disorder with a life expectancy of 37. The progressive disease leads to a build-up of mucus on the lungs that blocks the airways over time.

In April last year, Pippa underwent a double lung transplant at the Royal Papworth Hospital in Cambridgeshire after she became unable to breathe without medical support.

She said: “The operation was obviously life changing in multiple ways but one I never really considered pre-transplant was that it would affect my diet.”

To prevent her new lungs being rejected by her body, Pippa must take immunosuppressant drugs for the rest of her life. This means she has a much lower than normal resistance to infections. She has to be vigilant with her diet and avoid foods such as raw or undercooked meat, shellfish or eggs, reheated rice and any live products such as yoghurt or soft cheeses.

She said: “Before this I had always been a complete foodie; I loved trying new recipes and ingredients, spending most of my wage on eating out. I had an ever-growing cookbook collection which I spent my life browsing and recreating from.

“One of the first things I remember after my surgery was being told I wasn’t going to be able to eat rare steak ever again…and the horror! Soon after this a dietician handed me a list of all the foods I could no longer eat and all the ways I had to be careful when preparing food and eating.” 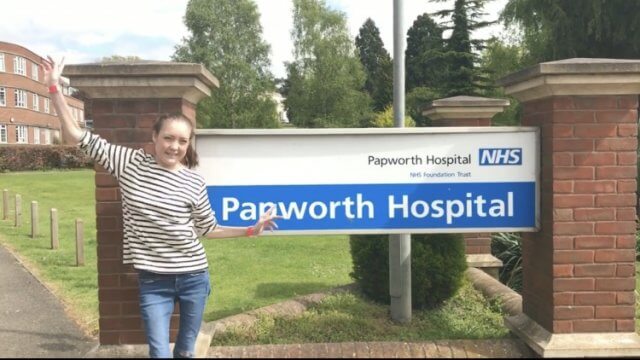 Pippa, a PR manager from Battersea in London, discovered that help and support for people in her situation was severely lacking so she decided to create her own solution.

She said: “I soon realised that the diet I was now restricted to was not simply for those who had received transplants.”

Pippa found that like her, hundreds of thousands of people in the UK alone are dealing with taking immunosuppressant drugs every day. This includes those who have had an organ transplant, are undergoing chemotherapy, have Crohn’s Disease or rheumatoid arthritis.

After struggling to find recipes she could eat safely, Pippa decided to do something about it. Now she aims to raise £50,000 to fund her own cookbook ‘Now What Can I Eat?’ to help those in a similar situation to her, whose diet is severely restricted by illness or an operation.

Pippa is compiling recipes from top chefs including Gizzie Erskine, Paul Ainsworth, Tommy Banks and Mark Hix as well as restaurants Leon, Burger and Lobster, Honey and Co, and well-known foodies such as Tess Ward, Alice Living and Lili Vanilli.

All the recipes are 100% immunosuppressant friendly, with all the right ingredients and simple steps to ensure anyone in her situation can prepare safe and delicious food.

She said: “The idea is that those who are dealing with illness, and their friends and family, have enough to worry about without having to think about food too. For everyone else it’s just a beautiful book crammed with recipes from some of the UK’s favourite chefs and foodies and with the added bonus that funds raised through sales will also be going to charity.”

Pippa has secured a publisher, contributers and specialist support but to make the book a reality she needs to persuade others to get behind the cause by donating.

Proceeds from the book will go to the Papworth Hospital Charity and the Royal Brompton and Harefield Hospitals Charity.