Would a “basic savings rate” save your savings?

Could a basic savings rate save savers?

The City Watchdog has answered the SOS – Save Our Savings – cry of millions of savers fed up of low interest rates that don’t even touch inflation with a new idea, announced in a consultation paper today: the “BSR” – a basic savings rate that stops savers on long term ultra low rates suffering unduly by placing a floor on what savings providers pay.

But experts reckon this might not have the desired effect.

Sarah Coles, personal finance analyst at Hargreaves Lansdown, said: “This would be good news for people who don’t get round to switching, because the BSR would improve their rate. However, only by a smidgen. According to the calculations in this paper, it would boost it by less than 0.1 per cent, so it’s not going to remove the need for savers to shop around to get a decent rate.”

Sue Hannums, of savings website Savings Champion, said: “The idea of the Basic Savings Rate (BSR) will indeed help those savers with money sat in accounts paying next to nothing. However, with the providers setting the bar this could actually lead to a lowest common denominator – will the providers play fair when they are given a free rein?

More needs to be done and the fear is that with the introduction of a BSR, savers may be even less compelled to switch accounts – which means that the high street may actually retain even more money.”

The best way to improve the rates your savings are on remains to switch to higher-paying accounts – making sure that rates beat inflation, which is possible, although only a few accounts do and they tend to require you to lock in for a longer term of at least three years.

You might want to consider investing (in an ethical or sustainable fund in your ISA, naturally) instead, as returns from investing CAN be (although are not always) higher.

Or try an ethical savings account to at least get some feel-good factor, if not more interest, from your savings.

New research has revealed that 79 per cent of Shariah-compliant savings accounts (ethical by default and available to non-Sharia customers) now offer better average rates than conventional accounts – but still not quite enough to beat inflation.

The average rate on Shariah-compliant products was 1.54 per cent compared with 1.29 per cent for mainstream ones – a difference of 0.25 per cent – across eight popular accounts surveyed.

The inflation rate is currently 2.4 per cent, meaning that any saver earning less than this on their savings is losing money in real terms. The average Shariah-compliant savings account only beats the current rate of inflation for savers prepared to lock in to a rate for five years – the average rate on this term is 2.68 per cent.

According to the website Savings Champion, only 26 savings accounts currently beat inflation (in the table below) – all of the rates that beat inflation require savers to lock in for at least three and a half years. 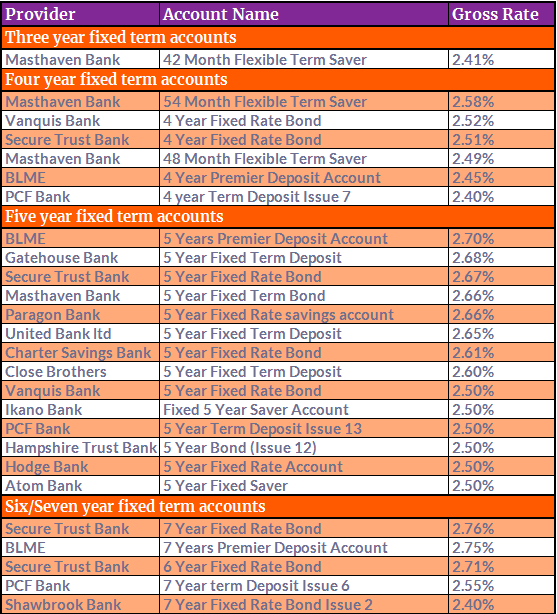 Tom Adams, Head of Research at independent savings advice site, SavingsChampion says: “High levels of inflation have an impact on savers right now, so they shouldn’t accept the paltry rates on offer from the high street providers in particular – switching to mitigate the effect of inflation is far better than leaving the funds earning next to nothing. Those who are active can still find a number of accounts that are paying interest rates that are greater than CPI inflation – albeit over the longer term and accounting for just 2% of the savings market. But even if savers can’t tie up their money for the longer term, by choosing the best rates for the rest of their funds, they are doing all they can to mitigate the effect of inflation on their accessible money.”

The Shariah research, from Gatehouse Bank looked at easy access, 1,2,3 and 5-year fixed term and 30, 60 and 90-day notice accounts. It found that average returns on Shariah-compliant savings products outperformed their traditional counterparts on all account types except one, which was easy access.

All but three of the 14 Shariah-compliant accounts surveyed beat the market average rate.

Shariah-compliant savings accounts in the UK are growing fast in popularity, amongst both Muslim and non-Muslim savers. Savers are attracted by the better returns available as well as the ethical way they invest.

Gatehouse Bank’s CEO Charles Haresnape said: “Shariah-compliant accounts are still relatively niche but this part of the market is growing significantly. Savers increasingly understand how they work, the ethical way they invest and, above all, the superior returns many offer.

“Shariah-compliant institutions have to work harder to get the public’s attention and offering better rates is one quick way to achieve this. But, on a more fundamental level, what we’re seeing is the emergence of a genuine challenge to the UK savings establishment.”

The table below shows the average mainstream and Shariah-compliant rates for each category of account as of 09/07/18:

Gatehouse Bank generates returns for its customers through Shariah-compliant financing and investments, making its products popular with savers seeking ethical returns on their money.

Some of the foundations of Islamic banking will appeal to anyone, Muslim or otherwise, who agrees with its principles of equal distribution of money, fair trade and the well-being of communities.

Gatehouse Bank does not invest customer deposits in gambling, alcohol, tobacco or arms companies. Examples of eligible financing and investments include construction projects, property, and sukuk (similar to bonds).

To comply with Shariah law, which states that money should not in itself have any intrinsic value, the bank offers Expected Profit Rate (EPR) as an alternative to traditional interest rates.

If the company feels that the EPR will not be achieved, it will give reasonable advanced notice and customers can close the account immediately with no penalty. They will be given the profit they have earned to that date.

London-based Gatehouse Bank and its deposits are protected by the Financial Services Compensation Scheme up to £85,000 per person. The minimum initial deposit is £1,000.