Bad memories – one reason I pay into a pension

A lack of financial security was a constant, low lying theme of my childhood. My parents ran their own business – together. You can imagine the mealtime chats. That’s if we did all get around the table together – a rare thing, thinking about it, as one parent was often still at work.

We did get to see more of Mum and Dad than my friends with employed parents perhaps did. They did school drop-offs and pick ups between them and that was nice, looking back.

So we had quite a lot of face time with our parents. But financial security? Not so much. The mood in the household went up or down depending on business cashflows, which were too often going the wrong way, particularly in the early 1990s, a time of high interest rates (I do actually remember 15%) and a poor economy.

Our house was up for sale for a few years. It was the days when if you could charm a bank manager into giving you a bigger mortgage, they did. And my Dad was very charming, but we couldn’t afford it, particularly when interest rates rose, and we eventually sold the family home (happy memories, sad times) in 1994.

The loss of a house, a struggling business and ongoing money worries eventually, over the next few years, led to the breakdown of a marriage.

Seeing the slow undoing of my family life as a teenager of course had many effects, but one was an absolute determination not to make the same financial mistakes as my parents.

I resolved to be employed – self-employment, I could see first hand, could be a hard life.

But fast forward a few years, to baby-bearing times, and whaddaya know? I’m self-employed. For the last eight years or so, this way of working has worked for me: contracts, freelance, my own website. A hustle between the school run and breastfeeding and the needs of others.

In becoming self-employed, though, there were a few things I was determined I wouldn’t miss out on. I had to create my own benefits package – it was something I was not prepared to compromise on. So for the last eight years, I have paid into my own pension, paid for my own life, income protection and health insurance.

The pension though.. that’s been tough to maintain and when the boys were tinies, I did stop paying in for a time as the here and now was so demanding.

But I did resume it and although my contribution is not massive, at £100 a month at the moment, it’s something.

My parents were poor in retirement. As self-employed people, they did not set enough aside. My Dad, a man who liked nice things, fast cars and big houses, did not have enough money when he stopped working and lived in a small, rented house on a very low income until he passed away.

My mum, until she became very poorly a few years ago, continued to work in a role that she planned to do through retirement and for as long as she could. She didn’t have much choice about that really, as she had no pension whatsoever.

Why a pension and not just savings?

Pensions are better than savings because a) you can’t access them til you retire, removing temptation and b) your reward for that long-term effort is TAX RELIEF. An instant uplift equal to the rate of tax you pay, so either 20 per cent or 40 per cent depending on whether you pay basic or higher rate tax. You just don’t get that kind of boost from anything else.

“You can’t take it with you”, my Dad used to say. I get that. Money isn’t everything. But I learned, through watching my parents’ struggles, the value of proper financial security.

There are lots of things you can do as a self-employed, part-time Mum, to feel more financially secure. Setting up a pension is a biggie.

Don’t be put off by the “amounts needed” info which can seem so unattainable when you are in the thick of child rearing.

Just something, a small amount at first that you commit to review just annually. It will make a difference to how you feel now, how you feel in the future and importantly, how your kids feel, because parents who feel more financially secure are not constantly transferring money anxieties to their children. 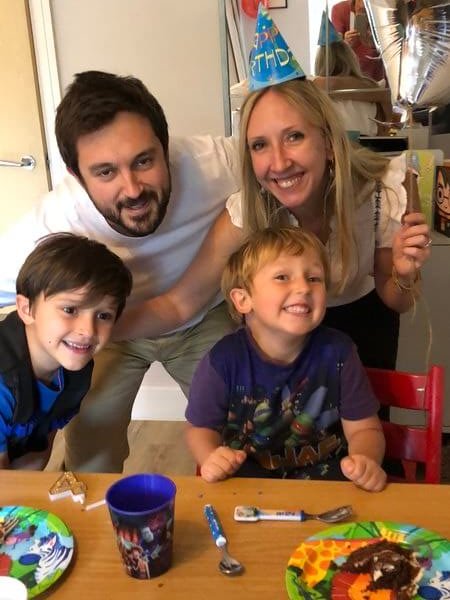 I am a case study of being on the receiving end – money anxiety was the most dominant negative theme in an otherwise happy and emotionally stable home. I don’t resent my parents for it or blame them for not being as on it with money as they perhaps should have been, but the memory of how all of that made me feel is still there, in the background, spurring me on.

I don’t think it hurts children to grow up with a few hard money lessons. In fact they need to know it doesn’t grow on trees and that financial security is earned and not a given. But those lessons can be delivered in a healthy, positive way too, not, as in my case, through quite a lot of stress and unease at home.

If reading this has made you think at all about your own pension planning then do consider playing around with some calculators, like the PensionBee one, to see what a difference a bit of saving now will make.

And if you don’t have a pension already and want to do one thing for your finances before the end of this year, start one. You’ll only ever regret not having one in the future – it’s very unlikely you’ll ever think “oh I am so glad I didn’t bother with a pension”.