A new report has revealed that the world’s largest investment manager, BlackRock, owns more fossil fuel assets than any other investor, undermining its recent attempts to market itself as a sustainable finance leader.

The report published by UK NGO Influence Map shows that the US based firm – which manages more than $6 trillion of the world’s money – owns fossil fuel assets amounting to 9.5 gigatons of Co2 emissions, equivalent to 30 per cent of the world’s energy-related carbon emissions for 2017.

Just under half of these investments are in coal, an area that BlackRock again leads, with the firm overseeing the most coal intensive portfolios of any global asset manager at 571 tons of coal per $1 million of assets under management (AUM).

The report comes hot on the heels of a spurt of recent ‘sustainable’ fund launches from the manager, including a new range of six passively managed ETFs: the ‘iShares Sustainable Core Suite’, through which BlackRock claimed to be taking environmental investment into the ‘mainstream.’ 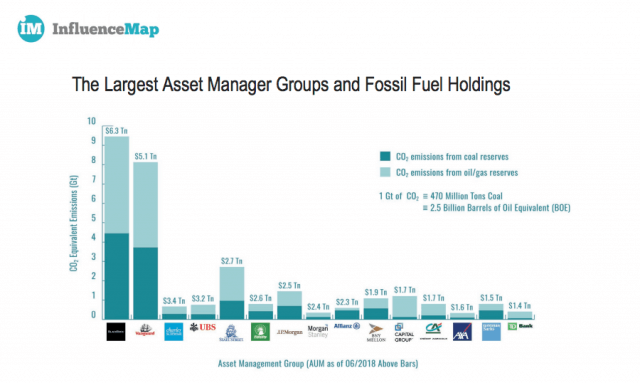 Commenting on the findings, Lukas Ross, Senior Policy Analyst at Friends of the Earth, says: “No amount of greenwashing can erase the fact that Blackrock is financing the destruction of our planet and escalating the climate crisis.

“As long as BlackRock is the top investor in fossil fuel development, Larry Fink’s sustainability claims will remain hollow and hypocritical. If Blackrock is as concerned for the environment as they say, then they must immediately transform their investments.”

Interestingly, the Influence Map report also highlights that it is passive strategies – which BlackRock’s Sustainable Core Suite of ETFs is – that are driving investment in fossil fuels.

The research shows that within its passive index tracking funds, BlackRock’s carbon intensity is 650 tons per $1m of AUM, while its active funds, where a manager oversees the portfolio, score just 300 – well below the 371 ton global average for coal assets.

This is because passive strategies like ETFs and index tracking funds take no active role in screening their investments and merely track indices like the FTSE 100 in the UK or the S&P 500 in the US – many of which include fossil fuel companies.

This is one of the reasons many so-called low carbon ETFs hold fossil fuel companies. These include BlackRock’s ACS World Low Carbon EQ Tracker and iShares MSCI ACWI Low Carbon Target ETF, which the report says hold 44,000 and 31,000 tons of coal reserves and 480,000 and 270,000 barrels of oil and gas respectively.

The group says that the passive problem has been exacerbated over the past two years as US coal firms Peabody Energy and Arch Coal have emerged from bankruptcy and relisted on main markets.

It says this has contributed to a 20 per cent surge in coal holdings among the world’s 15 biggest asset managers since the Paris Climate Agreement of 2015.

French asset manager AXA has been particularly affected, with its coal investments surging 117 per cent as a direct result of Peabody and Arch relisting. 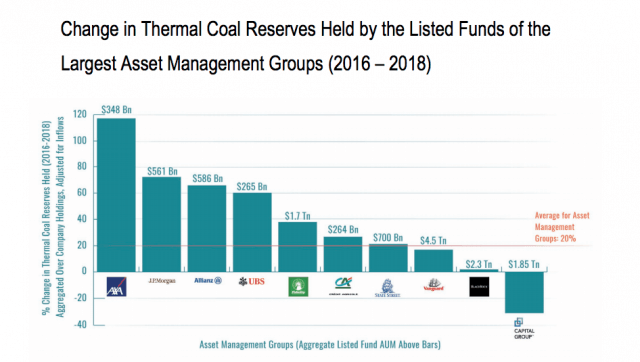 Commenting on the issues with passive index tracking and sustainable investment, Influence Map says more will need to be done at the top level to limit the inclusion of fossil fuel companies in main markets:

The NGO says: “The trend towards passive trading by index tracking has increased dramatically in the last decade for a range of reasons, including the demand for lower cost investment strategies.

“Given this trend, any effective approach to addressing thermal coal and other commodities at climate risk within mainstream portfolios will require the involvement of the major financial index providers.”