Plastic is everywhere. It goes so much further than the obvious expanse of children’s toys, toiletries and consumer packaging that fill our homes. It might surprise you to know that cars and planes are 50 per cent plastic, more clothing is made out of polyester and nylon (both plastics) than cotton or wool, and even the 60 billion tea bags produced in Britain each year are sealed with plastic.

The devastating effects of plastic on our planet have been known for years, but it was David Attenborough’s Blue Planet II documentary last year – which showed a turtle hopelessly tangled in plastic netting, and a dead albatross with shards of plastic lodged in her gut– that shifted public opinion so decisively against it.

While governments worldwide scramble to put laws in place that will eventually ban or at least reduce single-use plastics, the gathering momentum behind “plastic-free July” reveals that many of us don’t want to wait. To find out just how possible it is to live without single-use plastics, Good With Money writer Lori Campbell – along with her two young children, puppy and two cats – has put living plastic-free to the test for one week.

As Lori reaches the end of the week, she discovers that although refusing plastic is a bit like taking on consumerism itself, it’s easy and satisfying to commit to small changes that – added up – can “really make a difference”

“This week marked the end of the school year, which for us means a water fight and picnic at the park to celebrate the summer holidays. Usually I’d make a quick dash to the supermarket before school pick up to grab sausage rolls, crisps, humous and fruit etc, but not this time.

Knowing all my usual choices would be covered in plastic, I opted for our local Groombridge farm shop which sells loose fruit and vegetables as well as delicious cakes, pies and bread. Unfortunately I came away with only cherries, strawberries and crisps (feeling unsure if the bag was plastic) as most products came in plastic wrappings or containers. It was clear that plastic-free picnics mean serious planning, something I definitely need to get better at. One great change I have made is swapping plastic cling film for reusable beeswax wrap, which also happens to look really nice.

The next day we headed to Camber Sands beach and I did my best to pack a no-plastic picnic with fresh bread from the bakery, apple pies, loose fruit and metal flasks of water. Sandwich fillings are proving a tough one, but we managed tuna and mayonnaise (from a glass bottle). So far so good. Until some seagulls swooped down and stole the apple pies in one go, and a gush of wind blew a load of sand all over the rest of the food!

After a few hours on the beach I had two very hungry, exhausted children in the car and I’m ashamed to say that we had nothing short of a plastic binge in Sainsbury’s. The lack of options in this situation left me (and the children, who have taken this challenge very seriously!) feeling pretty deflated.

I wanted to buy the children a small toy each as a treat to take on a sleepover, but looking around The Entertainer toy shop, I couldn’t see past all the plastic toys and plastic wrappings. Plastic toys are not intended to be “single-use” but a recent poll by the British Heart Foundation found that more than a quarter of parents admit to throwing away toys that are in perfect working order.

I knew the ‘glitter (plastic) nails’ and ‘make-your-own pirate ship’ sets would be played with once before being thrown away so went the old-fashioned route instead and got colouring books and pencils – which although not as flashy, they thoroughly enjoyed. We always send old toys to a charity shop, but other great ways to cut back on plastic toys are toy libraries (you can search online for your local one), sharing with friends, and simply buying LESS.

Speaking to my son’s class teacher about our plastic-free week, I found out that the school faces big challenges of its own with plastic. The local council refuses to pick up plastic recycling from the school grounds which means that, unless teachers take it home, ALL the plastic used at school goes in the normal bin to be sent to landfill. Desperate to change this, the children in my son’s class wrote a letter to our local MP Greg Clark begging him to take action, which he has promised to do. Although frustrating to hear, it shows the will is there – and the way will be too if we shout loudly enough!

This issue isn’t only specific to schools. The owner of our local café said she also has no option for plastic recycling, other than taking it home or to the tip herself. The school also spent a long time finding a glass bottle alternative to milk cartons and plastic straws, only to find they couldn’t fit them in the fridges because of the circular shape. 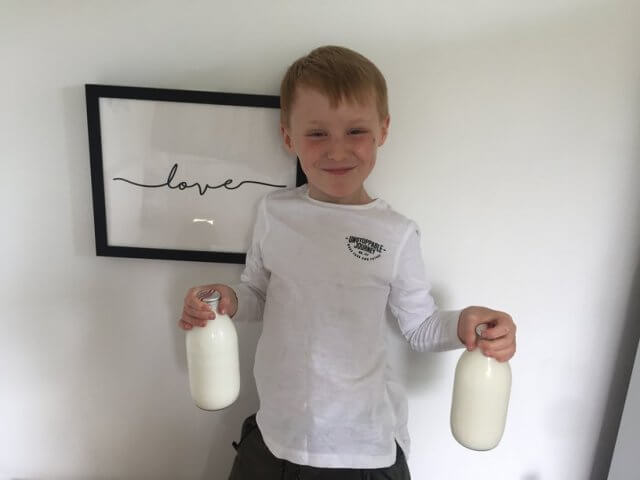 Overall, this challenge was much harder than I ever expected. I found tackling the vast amount of plastic we use every day totally overwhelming at times – both from a planning and cost point of view.

The sheer convenience and affordability of plastic is, afterall, what has made it so prolific in every part of our lives. While I missed the ease of doing all my shopping online in one go, trying our local shops instead has had the added benefit of connecting with people in our community and I will definitely continue with this as much as possible.

I am particularly excited about the upcoming launch of the Zero Waste Company in Tunbridge Wells, which will be selling refills on groceries and toiletries as well as potentially offering a co-working space for freelance workers. I love this idea.

Having discussed reducing plastic with friends over WhatsApp, my social media accounts quickly filled up with targeted adverts for plastic-free alternatives to everything you can think of. While some incredible businesses are rising to the challenge of offering plastic-free alternatives to everyday items, I have definitely realised that changing everything at once would be setting myself up for failure. Instead, reducing our plastic consumption has to be about making small changes and wiser choices which – if we all do to whatever extent we can – will add up and really make a difference.”

This is where our readers come in: we want to open up the Plastic Free Challenge to the nation to find out what we, business and government need to do to save our oceans.

If you would like to take on the Plastic Challenge and be featured in Good With Money get in touch with Lori at lori.campbell@good-with-money.com