A new report from Oxfam has found that the seven richest countries in the world are not fulfilling their stated commitments to UN Sustainable Development Goal number 10 – to ‘reduce inequality within and among countries’ – through systemic failings that are having a devastating impact on people and the environment in their own countries and abroad.

The report, entitled ‘The G7’s Deadly Sins’ has been published ahead of a big meeting of what is known as the G7 – the group of the world’s most affluent countries that consists of the US, Canada, the UK, Germany, France, Italy and Japan – in Biarritz this weekend.

It looks at seven key policy areas where, it says, G7 countries’ actions drive a wedge between rich and poor people both in their own and developing countries, including failing to implement progressive tax systems and supporting a ‘shareholder-first’ business model that drives down the wages and conditions of workers.

As the rich get richer…

The charity says that income inequality has been rising across the G7 since the 1980s and that today the poorest 20 per cent of people in G7 nations receive, on average, only 5 per cent of all income earned from work, while the richest 20 per cent receives about 45 per cent. 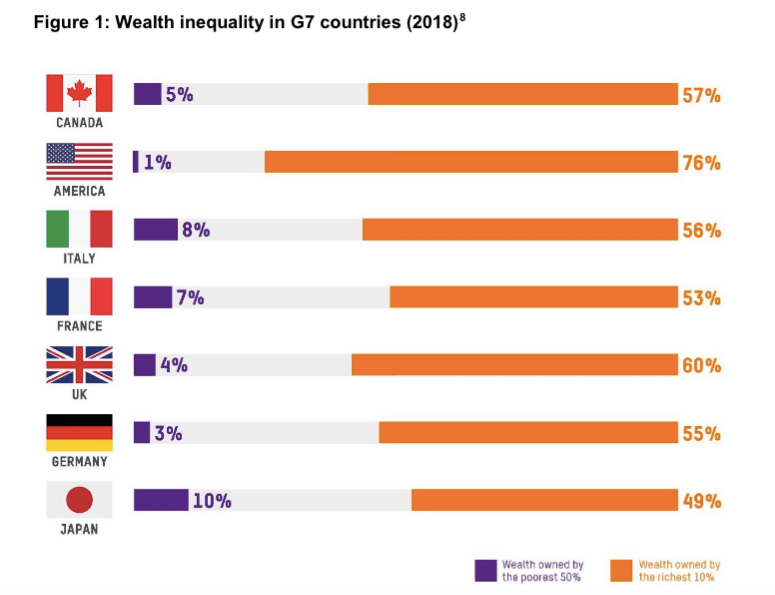 The charity says that G7 countries also have low intergenerational mobility: in France and Germany it may take six generations – or more than 150 years – for children of poor families to reach the average income in their country; five generations in Italy, the UK and the US; and four in Canada and Japan.

High levels of inequality make it more difficult for younger generations to advance on the earning ladder. A recent survey commissioned by Oxfam found that two out of three young Italians aged 18 to 34 believe they will not be better off than their parents.

On a global scale, inequality is even starker with more than half of total global wealth owned by people living in G7 countries while the workers that supply its companies in developing countries like Bangladesh, South East Asia and Africa – live on less than $4 a day.

The seven key policy areas that Oxfam says is causing this rampant inequality are:

Oxfam has proposed a number of potential measures that G7 governments could take to address systemic inequality throughout the region. This includes taxing the wealth of the top 1 per cent of people 0.5 per cent extra, which it says could raise more than £200 billion a year. The charity says that would be enough to provide education to the 262 million children who are out of school and provide healthcare that could prevent the deaths of two million people.

Oxfam France’s Executive Director, Cécile Duflot, said: “G7 governments have helped to create the inequality crisis, they now have the responsibility to be part of the solutions – to make a choice between a brighter and more sustainable future for all of us or continued extreme wealth for a few.”

The charity is also urging British Prime Minister Boris Johnson to use his first G7 as Prime Minister to set out how he will deliver on his leadership campaign pledge to fight for those who feel left behind and to bridge the wealth and opportunity gaps between different parts of the UK.

Instead of cutting taxes on the richest, Oxfam says the Prime Minister should look at ways to make the tax system more progressive, including how to tax wealth more effectively.

“G7 governments have helped to create the inequality crisis, they now have the responsibility to be part of the solutions”

By way of illustration, Oxfam calculated that a new tax on net wealth targeted at the very richest in the UK, based on Spain’s system – starting at 0.2 per cent and rising to a maximum of 2.5 per cent on net wealth of more than £12 million – could raise around £10 billion a year, which could be invested in supporting the poorest at home and abroad.

Oxfam says there is support for fairer wealth taxes from across the political spectrum, including the Archbishop of Canterbury, former Conservative Minister Lord David Willetts and Institute of Fiscal Studies Director Paul Johnson.

Finally, Oxfam warned that the G7 is not doing enough to cut carbon or to help poor countries adapt to the climate emergency, despite historically having been responsible for the largest amount of emissions. It says G7 countries should cut greenhouse gas emissions drastically now, and to zero ‘well before’ mid-century, and mobilise the promised $100 billion a year by 2020 to support climate action in developing countries.