Renewables to power a decade of transformation

Matthew Clayton, managing director of Thrive Renewables, sets out a bold vision for the near future of UK renewable energy as we enter a new decade

As we end this decade and move into the next, there are some signs of hope in the midst of the climate crisis. Since 2010, the UK has more than tripled the amount of electricity generated from renewable sources like wind, solar or hydro, from 10% to almost 40%.

Latest government figures show renewables are now the country’s biggest source of power for electricity, a huge achievement for the sector.

A growing number of people have woken up to the climate crisis and want to take action now. This is driving innovation in all areas, like the way we fund renewable energy projects.

Crowdsourcing platforms were hardly around 10 years ago and now they are enabling people to invest directly in building new renewable energy projects.

The word ‘renewable’ will become redundant – all electricity will be clean electricity!

The way we use and pay for energy is changing too. New energy tariffs empower people to use cheaper electricity when there is abundant renewable supply as we move towards a much smarter energy system.

We all know the climate crisis will only become more urgent unless we have a massive step change in how we tackle it. The 2010s mark the end of the time for organic transition – we now need radical transformation. If we are to get to net zero carbon emissions as a country, the next 10 years will look very different.

A smarter energy grid will help us use electricity more intelligently by taking advantage of peaks and troughs in electricity supply and demand. Intelligent smart meters will control energy intensive appliances, like the washing machine, when renewable energy is abundant and therefore cheaper. Electric vehicles will charge up and store electricity at night when demand is lower. By making the relationship between supply and demand better balanced, we make better use of resources we have.

Energy efficient homes will save you money

The average UK home spends 6.9 per cent of household income on energy, often with the lowest income households spending more. Over the next decade we will retrofit older homes to make them more energy efficient and all new homes and buildings will be built up to the highest energy efficiency standards. Less energy wasted is more money saved.

Every home will be heated using renewable heat

Space heating accounts for almost a third of our household carbon emissions as most homes use gas boilers. These will be phased out over the next decade and renewable heat, such as ground-source or air-source heat pumps powered by a renewables based electricity system, will keep us warm. 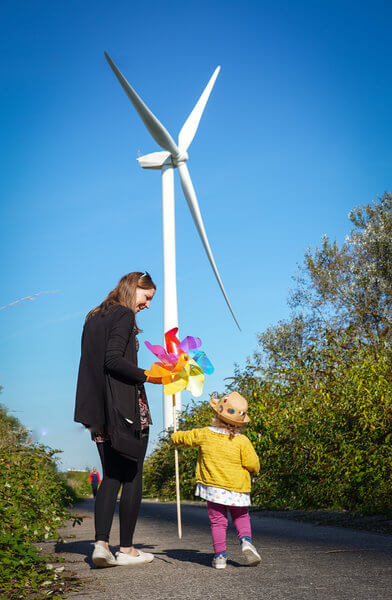 Communities will own their own local power supply

Community energy groups who own their own solar and wind farms will help to decentralise energy generation by creating smaller communities of local users and generators, linked using the latest technology. We expect community energy groups to grow and develop using innovative finance options including crowdfunding and smart energy management.

Businesses will generate their own renewable energy

Businesses will play an active part in our energy system with their own renewable projects on site, often in partnership with energy generation companies. As well as using their own energy made from sunshine, wind and rain, they can store and release it into the grid, making them potentially more efficient, profitable and resilient.

We are starting to use advancing battery technology to help balance the electricity grid. When natural energy resources are abundant and demand is low, we will charge large scale batteries using renewable energy. When more energy is required at peak times, this stored power can be released back into the grid, providing flexibility.

Every electricity tariff will be green!

Over the next decade we will completely move away from using polluting fossil fuels to generate all our electricity from renewables. The government has legislated for net zero carbon emissions by 2050 and as part of that all coal power plants will to be shut down by 2025. The National Grid announced that they will be able to operate the grid on zero carbon by 2025.

The word ‘renewable’ will become redundant – all electricity will be clean electricity!

Thrive Renewables is a renewable energy company. Thanks to our community of over 6,100 investors, we have built or funded 22 renewable energy projects over the last 25 years, saving over 660,000 tonnes of carbon dioxide.

Top 4 platforms for your green IFISA