Ten green energy deals have been awarded a ‘gold medal’ for their use of renewable energy by comparison site Uswitch.

The Uswitch Green Accreditation is the first scheme to categorise tariffs into gold, silver or bronze with the aim of helping consumers better understand green tariffs and the different approaches suppliers take towards renewable energy.

Six tariffs from Good Energy, three from GEUK and one from British Gas earned the highest standard. The ranking is based on the level of renewable energy suppliers buy directly, as well as what investment they are making to support or promote renewable energy.

Gold tariffs provide 100 per cent of renewable electricity and 10 per cent of green gas. These tariffs also provide a meaningful contribution towards increasing and/or promoting renewable energy. This might involve investing in future renewable generation, such as wind or solar and market innovations.

Switch to a green energy tariff on Uswitch here.

“Despite the upheaval in the energy market over the past year, consumers still want to do their bit for the environment, so it’s great to see that there are ten gold tariffs being offered,” said Justina Miltienyte, head of policy at Uswitch.

“However, suppliers must continue to find ways to help consumers go green, whether through their tariffs or other initiatives.” 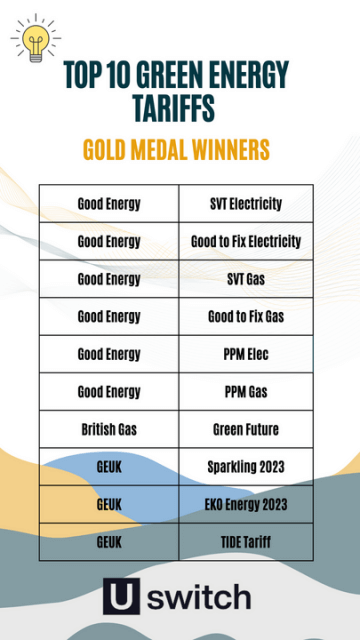 Four tariffs from Scottish Power, three from Octopus Energy and two from EDF Energy were classified as silver standard. This accreditation is given to tariffs that include 42.9 per cent of electricity bought directly from renewable generators via so-called power purchase agreements (PPAs).

Another 19 tariffs were classified bronze, including deals from Bulb, E.On Next and Shell Energy. Bronze tariffs provide electricity that is matched with renewable generation certificates. Suppliers can buy these certificates from renewable energy generators and they show how much renewable electricity has been put on the grid.

Octopus Energy and OVO Energy were also awarded a special commendation from the panel, in recognition of their green energy initiatives. Both earned special mention for their efforts to increase uptake of electric vehicles and make energy usage at home more efficient.

Ms Miltienyte added: “OVO Energy and Octopus Energy are making significant progress by offering innovative initiatives around the home and transport that help people not just reduce their energy bills, but also cut their carbon footprint.

“We hope to see more suppliers follow in their footsteps and launch further schemes which could receive special commendations next year.”

The awards come as a major shake-up of rules, making it quicker and easier to switch energy providers, has come into force.

Energy regulator Ofgem said there has been a perception amongst large numbers of consumers that switching is a hassle, is unreliable and won’t really be worth it financially. So now they are forcing energy firms to make sure the switch happens within just five days.

The new rules come in today as part of Ofgem’s new “Centralised Switching Service” scheme. However, there are concerns that there’s not a lot of switching happening right now because of challenges in the energy market.

Also, the latest forecasts show that the price cap is set to increase to more than £3,000 in October, meaning there are currently fewer offers on the market for consumers to switch to.