It found that MOST of the top 20 schemes are lagging behind in multiple areas, from short-term emissions targets to action on deforestation. More than half (60 per cent) of providers have not published the 2025 emissions reduction targets that are vital to delivering climate action in time to mitigate the worst consequences of a heating planet.

A ‘wake-up call’ to the pensions industry

Tony Burdon, CEO of MMMM, said: “12 months on from COP26 in Glasgow, climate action from the UK pensions industry remains insufficient and fragmented.

“We hope this report acts as an urgent wake up call to the pensions industry – highlighting the absence of clear, co-ordinated and consistent climate action to date – while showcasing the critical steps that must be taken to get back on track.”

Only four of the top 20 providers have made commitments on eliminating deforestation from their portfolios, MMM found. The report says that with deforestation now the world’s third worst carbon emitter behind the US and China – and over £300 billion of UK pension investments in companies at risk of driving deforestation – pension schemes cannot adequately act on climate without addressing their portfolios’ exposure to the practice.

Many leading schemes say they engage with their portfolio companies and asset managers to drive their transition to net zero. But MMM found that only ten have explicit climate voting policies which expect companies to align with global temperature goals.

The Good Guide to Pensions 2022 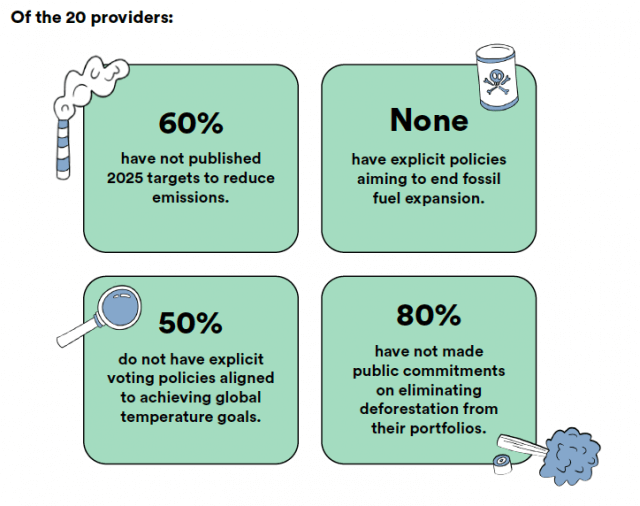 Shockingly, not a single scheme has a policy to end fossil fuel expansion, which is integral to reaching net zero. This undermines claims that they are working as effective stewards and contradicts guidance from the International Energy Agency that the UK does not need any new oil and gas developments.

While 60 per cent of the top 20 providers do have plans to increase their investments into climate solutions, they are not yet at the level of ambition needed to significantly scale up industries that offer us a way out of the climate crisis – such as renewable energy and green infrastructure.

The new analysis shows that the UK pensions industry is lagging behind on key indicators identified as crucial for addressing the climate emergency.

MMMM says it recognises the efforts of schemes that are reducing portfolio emissions and increasing investments into climate solutions, but says it is not enough, and more urgent, accelerated and ambitious action is now desperately required.

Richard Curtis said: “Now is the time for action on climate – words are not enough. Since 2020 pension providers have committed £1.3 trillion to net zero, and this is important progress: but now the time has come for them to move beyond targets and take real action for real world impact.

That real progress is already falling dangerously behind. We hope this report highlights the clear gaps in the climate action of UK pension schemes and urges them to refocus for 2023; directing their immense power and potential to address the twin challenges of climate change and biodiversity loss.

We need pensions with purpose – we need to make our money matter in building a better world. By putting the £3 trillion in UK pensions to work in service of the planet, and pivoting from climate commitments to real action, the pensions industry can maintain the momentum generated over the past 12 months, and make sure our money is building a world fit for our retirement. There is no point inheriting a pension in a world on fire”

Make My Money Matter analysed data from the following schemes: