Which are the best UK funds for impact?

The below is an extract from the Good Investment Review, a free-to-download, bi-annual publication, which rates UK impact funds, from 3D Investing and Good With Money.

There are now 201 funds with some form of sustainability/ethical mandate, which are registered for sale in the UK (not including life & pensions & offshore funds).

These add up to more than £87 billion in assets under management, still a relatively small proportion of the whole market but a meaningful amount nevertheless.

They follow one or more of the following methodologies:

Thematic – focus on investment in environmental or social themes

Of these, most are invested in equities, but there are a significant number of fixed interest, property and infrastructure funds, as well as mixed asset funds. 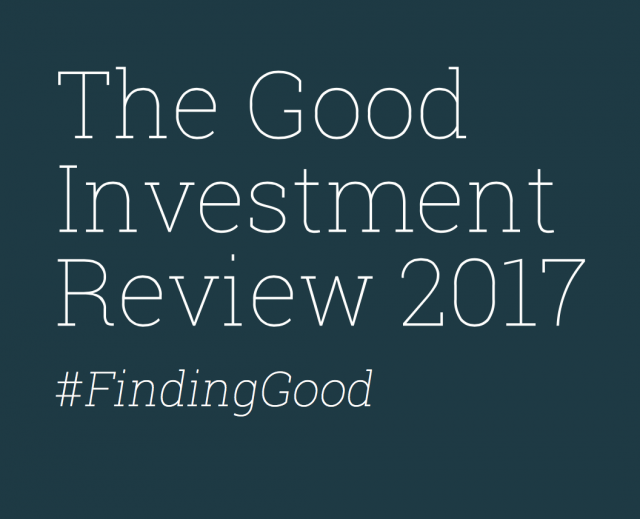 Since the last 3D review in November 2016, we’ve upgraded the Henderson Global Care Growth Fund to a four-star rating, as the fund manager has now released a paper justifying each holding in the portfolio and the commitment of the fund manager to demonstrating impact is much clearer.

The Quilter Cheviot Climate Assets fund was previously downgraded because of a lack of confidence in the application of its sustainability strategy arising from the inclusion of Rio Tinto, a mining company, in the portfolio. It now appears that this was a mistake in its report and accounts. We have therefore restored the fund to a four-star rating.

Having conducted detailed analysis of the Columbia Threadneedle Ethical UK Equity Fund, we’ve upgraded it to a four-star rating as it has the highest proportion in solutions to social and environmental challenges of any UK equity fund and it’s clear that the fund manager is personally committed to this fund.

The infrastructure fund, INPP, goes from a three to a four-star rating as the proportion of the fund in projects that are of direct environmental or social benefit merits the upgrade.

Assura takes top honours in the form of a five-star ranking, thanks to its much improved financial performance. This gives us much more confidence in its ability to deliver the expected returns, and its social impact reporting.

In the normal course of events, we wouldn’t anticipate downgrades unless there is a fundamental change in policy at the fund, or if we lose confidence in its ability to deliver financial returns in line with expectations.

Most of the downgrades over this period have been due to a normalisation process rather than fundamental changes.

Ishares Water – No ESG policy and some exposure to ethical controversies

Eight funds have been added to the universe of funds assessed including five which have made it into the 3D portfolios.

Civitas Social Housing is a new real estate fund that was launched to invest in social housing assets, whilst fund manager Sarasin has launched a responsible corporate bond fund on the back of a successful existing mandate.

Phaunos Timber is a fund that has been around for some time but was very poorly managed for many years. The current managers seem to be turning this around so we’ve added this as a specialist fund.

Just over a year ago, Jupiter soft-launched a multi-asset fund called the Jupiter Global Ecology Diversified fund, seeding the fund from existing funds. Our analysis shows this to be more thematically driven than their competitors and our rating reflects this.

The Sarasin Responsible Corporate Bond Fund was launched in December of 2016 based on a proven strategy, run over more than five years for an existing mandate. The fund has a higher focus on solutions than most other bond funds and as a result, makes it on to our portfolio selection.

The SQN Asset Finance Income Fund invests in business-essential, revenue-producing (or cost-saving) equipment, leasing this equipment to companies to provide an income for the fund. The fund currently has significant exposure to solar manufacturing equipment and anaerobic digestion facilities.

Triodos has run a microfinance fund for some time, but we’ve only just added it to our fund universe. Strictly speaking, it is not a retail fund as its only available for experienced investors with £10,000 or more to invest, but we thought that we should include it as it is one of the very few ways of investing in microfinance via a listed and tradable fund.

Finally, thematic investor, Robeco SAM has launched two specialist funds in the form of the Robeco SAM Healthy Living and Robeco SAM Global Gender Equality funds. These funds are not sufficiently focused on positive solutions to make it on to our preferred shortlist.

Liontrust has bought Alliance Trust Investments with the investment team moving across to Liontrust. At this stage, we are not aware of any major changes beyond renaming the funds, but will be meeting with fund management once the transfer has gone through.

One of the objectives of the 3D Star Rating is to encourage improvements over time in the way funds are run. We’ve been delighted that this seems to be bearing fruit with a number of companies having contacted us to see how they can improve their star rating.

It’s difficult to attribute a given change to anything we’ve said or done, but what matters is the end result and more companies now publish descriptions of the holdings and the reasons for holding them, something we’ve championed for some time.

The infrastructure funds detail all of their holdings, whilst Impax, Triodos, WHEB, Columbia Threadneedle (for their UK Social Bond Fund) and now Henderson (for their Global Care Growth Fund) describe their holdings.

We’re also keen that funds prove their positive impact and most of the five star funds do just that, but progress toward all funds demonstrating their positive impact is slow. Only WHEB, Columbia Threadneedle, Impax, Foresight and Assura actually document their impact in a measured and consistent way, so there’s plenty of scope for improvement amongst the other funds.

John has considerable experience in the ethical and sustainable investment arena dating back to 1991 when he became an independent financial adviser, entirely focused on ethical investments. During this time he also established the Ethical Investment Association, the industry body for ethical IFAs, wrote several guides to ethical funds and contributed to the development of the industry at an early stage.