The Big Issue’s Nigel Kershaw sets out to democratise capital

Founded in 1991, the Big Issue has become the global poster child for successful social enterprise – an example of the incredible good that a few people can do when they put their heads together and really, really try to change the world.

It is perhaps no surprise, then, to see The Big Issue launching what may be the biggest innovation in the money world for – well – maybe ever: The Big Exchange.

Announced in November last year, The Big Exchange will be the UK’s only investment platform to exclusively list ethical, sustainable and impact funds – creating a one-stop shop for those that want to make their money do Good.

Speaking to Good With Money on a drizzly London afternoon, chairman of the Big Issue Group Nigel Kershaw explained the team’s motivations:

“We’ve been in the investment world for a while with Big Issue Invest, as well as through social funds like our ‘Caterpillar’s Cocoon’, which channels funding to early stage ventures across the UK like Digital Mums – a social media outsourcing company that helps new mums work part time from home.

“A few years ago, though, we started thinking how great it would be if we could open up this kind of investing to everybody: if we could help anyone put their money into social and environmental impact projects – no matter how much money they had. And that’s really where it started.”

Kershaw says he and the team first explored the option of launching an investment trust back in 2011, which would invest in both public and private companies creating employment opportunities in the UK. However, he says it was “too pioneering” for the finance world.

Crucially, it also didn’t go far enough. As regular Big Issue readers will know, the magazine is a leading proponent of financial inclusion with co-founder of the magazine Lord John Bird leading The Creditworthiness Assessment Bill through the House of Lords.

This legislation aims to make it a requirement for credit providers to take into account rental and council tax payment history, helping to open-up low cost credit to those that need it most, yet are often forced to pay exploitative interest rates with high cost lenders.

Carrying this good work into his new project, Kershaw says he also hopes to list ethical lenders on The Big Exchange, helping the 4.5 million Britons without access to credit gain access, while he has plans for a cash account that would be available to the more than 1 million people that are currently unbanked.

He also wants to give Big Exchange users full control of their financial identities, which is one of the reasons the team has chosen to run The Big Exchange on the blockchain – through which each user will own and manage a ‘social passport’ of products that only they can see and share with other lenders or credit agencies.

Kershaw says: “Really, it’s a whole new financial system we’re trying to create, one that includes everyone and works for everyone. A long time ago I realised that money just doesn’t make sense to most people – especially people that care about the world. That’s what we want to change.” 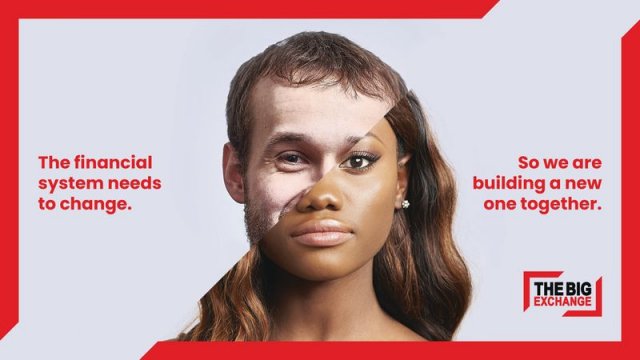 On this note Kershaw recounts a story of an early meeting he had with some industry figures, who shall remain nameless, but who had a rather rude awakening when they tried to suggest that his approach to investment was lacking.

“I have a great friend called Lily. She’s smart as you like but when people start talking to her about investment she just gets lost. So in this meeting, we’re talking about how to get young millennials investing, and I said that – among other things – we need to use ‘Lily Language’.

“Well, this guy says: ‘but isn’t that dumbing it down too much?’ I said I dared him to say that to Lily. Making finance understandable isn’t dumbing it down. I think that attitude is patronising and elitist and that’s the problem, you know? Some in the industry don’t try or know how to engage people.”

This message seems to have finally penetrated the financial world, though, with The Big Exchange winning the backing of some its heavy hitters, including Aberdeen Standard and Columbia Threadneedle alongside sustainable specialists like WHEB Asset Management.

George Latham, managing partner of WHEB says that, for them, getting involved was really a no-brainer: “I think The Big Exchange is an important initiative: it has a purpose we entirely subscribe to and we’re excited to be a part of it. Making investment more widely available is very much in-keeping with what we want to achieve.”

Kershaw echoes these sentiments, adding that the ‘democratisation of capital’ is the foundation stone of the Big Exchange mission.

Wrapping up our drizzle backed chat, he says: “This really is about giving ordinary people control of their finances. There’s a lot of distrust in the financial system. For a lot of people, the perception is that finance is run by people who at best are distant, and at worst are just in it for themselves.

“I think if you can say ‘you can invest your ISA in things that give you a financial return but are also good for you, your family, your community, your country’ – it’s that ability to take control that is absolutely critical. That’s what has always driven me. Just as The Big Issue does, it’s helping people to take control of their lives.”

Visit www.bigexchange.com to find out more details and, if you haven’t already, sign the Good With Money newsletter for updates on the launch of The Big Exchange.