How you choose to spend your money while traveling has a huge impact on the future of tourism and the people, places and animals on our planet. If you’re planning a holiday this year, it’s worth considering destinations where you can have a positive impact on the countries and communities you visit.

From banning sunscreen and reducing carbon and water footprints to making visitors take an oath swearing to protect the environment, we’ve rounded up the spots doing the most for sustainable travel:

The small Pacific island of Palau is respected around the world for its efforts to make tourism sustainable. The ‘Palau Pledge’ requires all visitors to swear to protect the paradise island’s natural and cultural heritage.

Last year the president of Palau introduced new regulations that will ban the sale and use of reef-toxic sunscreens beginning in 2020. The island also has a dedicated marine sanctuary encompassing nearly 193,000 square miles or 80 per cent of its territorial waters.

Slovenia’s capital is recognised for its green conscience, with the majority of residents opting for cycling as their main mode of transport. Bike sharing using the Bicike(LJ) system is free-of-charge across the city.

The water of the Ljubljanica river winding through the city is potable, with its quality equalling that of subterranean water. More than 30 drinking fountains provide free refreshment throughout the summer months.

The Himalaya kingdom of Bhutan is the world’s only carbon-negative country. Not only is it one of the world’s greenest countries, it is also arguably the happiest. And that’s no coincidence. King Jigme Singye Wangchuck developed his signature Gross National Happiness index based on four pillars: sustainable development, environmental protection, cultural preservation, and good governance.

Every guest to Bhutan pays a daily tariff of around $250 (£192) while visiting the country. This covers all hotels/home-stays, transportation, meals and guides during a visit. Thirty per cent of the tariff goes back into environmental preservation, community development, such as free health care for all residents and visitors, and community-based tourism projects such as helping families to host guests.

Gozo aims to be an ‘eco-island’ by 2020. It is striving to reduce its carbon and water footprints and has put in measures to protect the Gozitan lifestyle, environment, resources, culture and identity.

It has installed four innovative rainwater harvesting systems with a 500,000 litre capacity in primary schools across the island and has dramatically increased the use of renewable energy in government buildings and social housing. 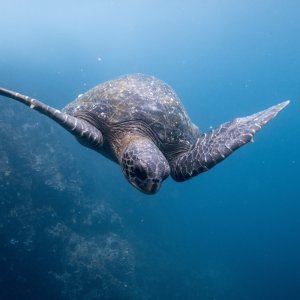 Tour operators taking visitors to the Galapagos National Park – which became the world’s first UNESCO World Heritage Site in 1979 – are required to make their business as environmentally friendly as possible.

With one third of the city covered in green, Berlin is bursting with nature and eco-culture. City leaders recently built a ‘Going Local’ app to counter over-tourism divert tourist streams and organise park clean-ups. Berlin also runs a series of workshops to educate tourism stakeholders on zero waste practices.

Chumbe Island, a few kilometres off the main island of Zanzibar, is known for its ecological innovation and exceptional coral reefs. In 1992 the fringing reef west of Chumbe Island was officially closed to fishing, boating, and diving.

The high quality of the reef is due to the limited human impact on the island and its waters.

Bardia is known for its wildlife conservation efforts including zero poaching which provides a safe habitat for species including the Royal Bengal tiger.

The island has successfully protected the species while also improving the livelihoods of residents by introducing predator-proof pens and biogas plants, which means locals don’t have to illegally collect wood from the national park.

Torroella de Montgri is taking big strides to transition away from cars to shared transport. Since 2014 it has participated in the GROWTH project, which focuses on the sustainability alongside competitiveness in tourism.