Revealed: Britain’s worst banks for emissions (and the best)

The UK’s biggest offenders in banking when it comes to carbon emissions have been revealed, as well as the best options to switch to if you want to reduce the carbon footprint of your money.

According to MotherTree, moving £5,767 (the average amount in a UK savings account) from Revolut or Barclays to Triodos reduces your carbon footprint by a massive 1.7 tonnes per year – that’s the equivalent of seven round-trip flights from London to Rome.

Switching to a greener bank account can also pay off for your pocket, as they are typically better at passing on increases in interest rates to their customers. For example, Barclay’s highest freely available savings rate (for non-rewards members) is 0.35 per cent compared to 1.15 per cent from the UK’s greenest bank, Triodos. 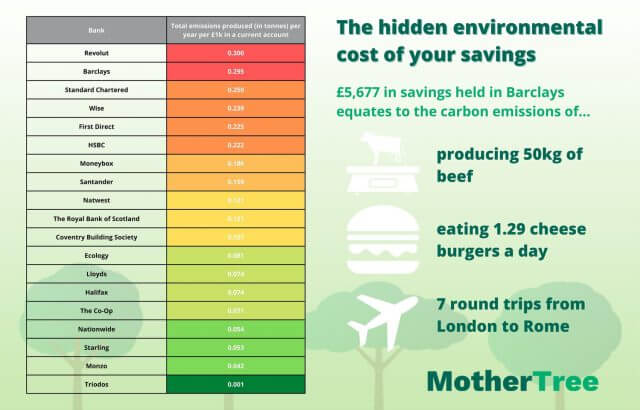 Each £1,000 held in a current account could be considered responsible for contributing up to 0.29 tonnes of carbon per year, if you hold your money with the worst ranked offenders Barclays or Revolut – the equivalent of driving over 729 miles in the average passenger vehicle.

The findings are calculated by looking at the overall carbon footprint of the UK’s major banks, including investment in fossil fuels, and the proportion of their overall net assets represented by each £1,000 saved by an individual in the bank.

Dan says: “Many people have no idea that their choice of bank has such an impact on climate change. The good news is that consumers have the power to control their own financial investments and that switching to greener accounts might actually help them earn more money in the form of higher interest rates. With switching banks now easier than ever, one of the best things UK consumers could do to reduce their carbon footprint is also one of the easiest!”

MotherTree is the world’s first carbon calculator for your money that helps you switch to greener, FSCS-protected providers.

Founder of MotherTree, Dan Sherrard-Smith, says: “Where we put our money is, arguably, the single most important choice we make when it comes to combating the climate crisis. Why? Because the companies we invest in today will thrive tomorrow.

“That’s why we built the world’s first money carbon calculator. So you know the impact of your money. It’s simple to use – and completely free. You pop in the amount you have with your bank and we display your money’s carbon footprint. We also show you what you can do about it; offering you a choice of banks and pension providers that invest in low-carbon activities.

“Surprisingly, switching your bank is often easier than giving up a flight or cutting out the meat. Our banks are all FSCS protected, which means your money is protected up to £85,000. Give MotherTree a try – it might just be the most significant change you make to address the climate crisis.”

Note: The carbon emission calculations in the table are based on the available data from banks and public resources. Full calculations can be found here. All data is calculated using publicly-available information from verified sources. All information is correct as of October 2022.

How higher education can pay off - for students AND investors